At Charm we take carbon from plants, convert it to liquid and inject it deep underground, permanently removing it from the atmosphere. Today we’re excited to announce that we’ve delivered over 5,000 tons CO₂e removal since January, our first (partial!) year of operation. We believe this represents the world’s largest permanent carbon dioxide removal delivery of all time.

And yet… 5,000 tons is a drop in the bucket. We are in a race against time to remove billions of tons of carbon dioxide per year (according to IPCC models.) We’ll need multiple methods of carbon removal, all scaling at breakneck speed, to meet our climate goals. That’s why we’re excited that Climeworks has also begun carbon removal deliveries, and other companies are racing to deploy their own carbon removal capacity. We’d love to see many more permanent carbon removal companies begin deliveries. 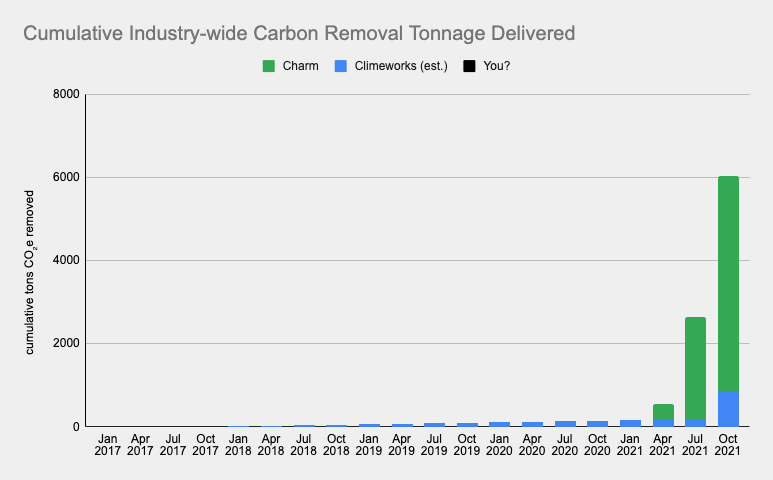 Their purchases are directly enabling us to scale up production of pyrolyzers to come down our future cost curve, much like solar power has over the past 20 years. To continue scaling up engineered carbon removal, we need more carbon removal buyers to convert their climate commitments into carbon contracts. It’s critical on the pathway to a healthy planet. You can purchase carbon removals here or reach us at sales@charmindustrial.com. As we like to say at Charm... Gigatons or Bust!