Earlier this year, in the bitter cold of Kansas winter, we began field testing our first scaled pyrolyzer, designed to process 10 tons of biomass per day. We’d done system checkouts and biomass processing tests at our San Francisco Minifactory, and the pyrolyzer processed California wheat straw at a reasonable rate for a prototype, so we shipped it.

When we arrived in Kansas, the corn stover turned out to be a bit different than expected. The bales were indeed composed mainly of leaves and stalks. They even included their fair share of rocks and other odd contaminants. No real surprises there: we were once warned by our farmers to be prepared for metallic contaminants up to the size of, and including, handguns… a suggestion so specific it had to be from experience. But we were not prepared for the overwhelming onslaught of corn cobs, some still filled with rock-solid corn kernels. Those were supposed to have been fully harvested!

This posed a major issue: our pneumatic (air blown) conveyance couldn’t reliably move these dense materials that made up a sizable fraction of the biomass stream. Without a way to convey biomass into our machine, our critical path to bio-oil production and capacity for bio-oil sequestration was blocked.

So the team got right down to business handling those cobs: 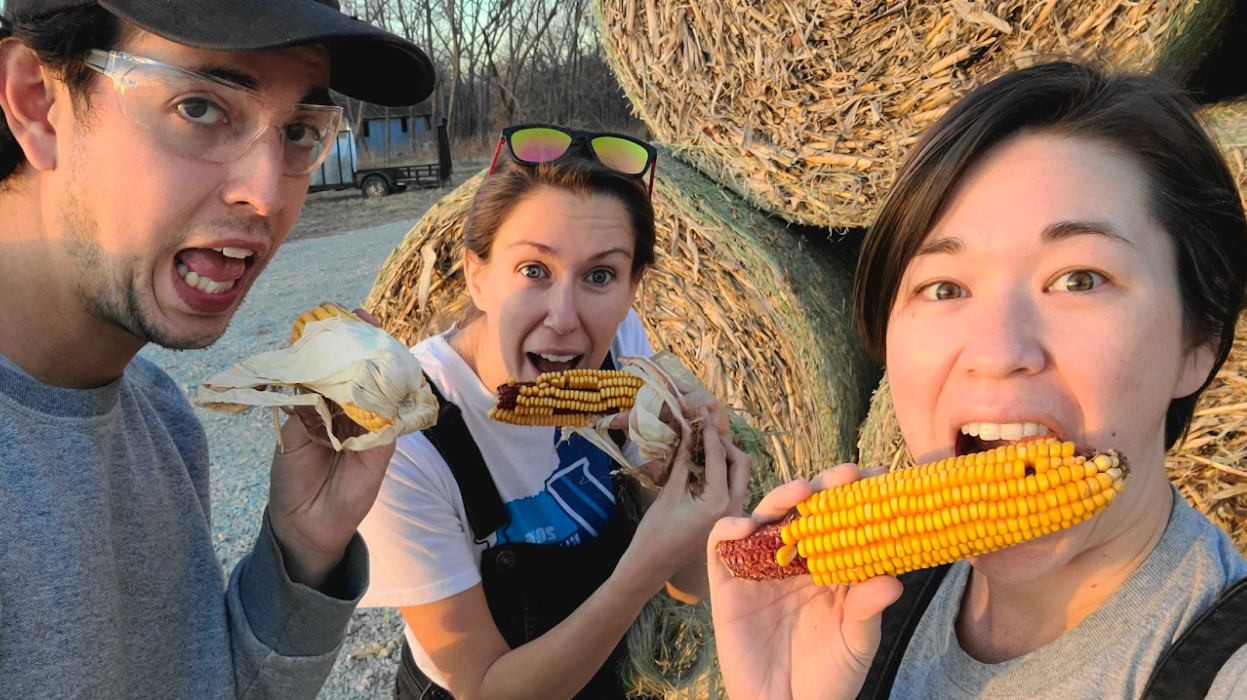 But more seriously, we had a real engineering problem to solve.

The failure of KiOR—a $300m bankruptcy back in the first cleantech boom—was partially due to difficulties with biomass processing. Among other things, they couldn’t convey biomass out of trucks fast enough into their biorefinery, and the KiOR engineers had to quickly implement a whole truck dumping system similar to these: 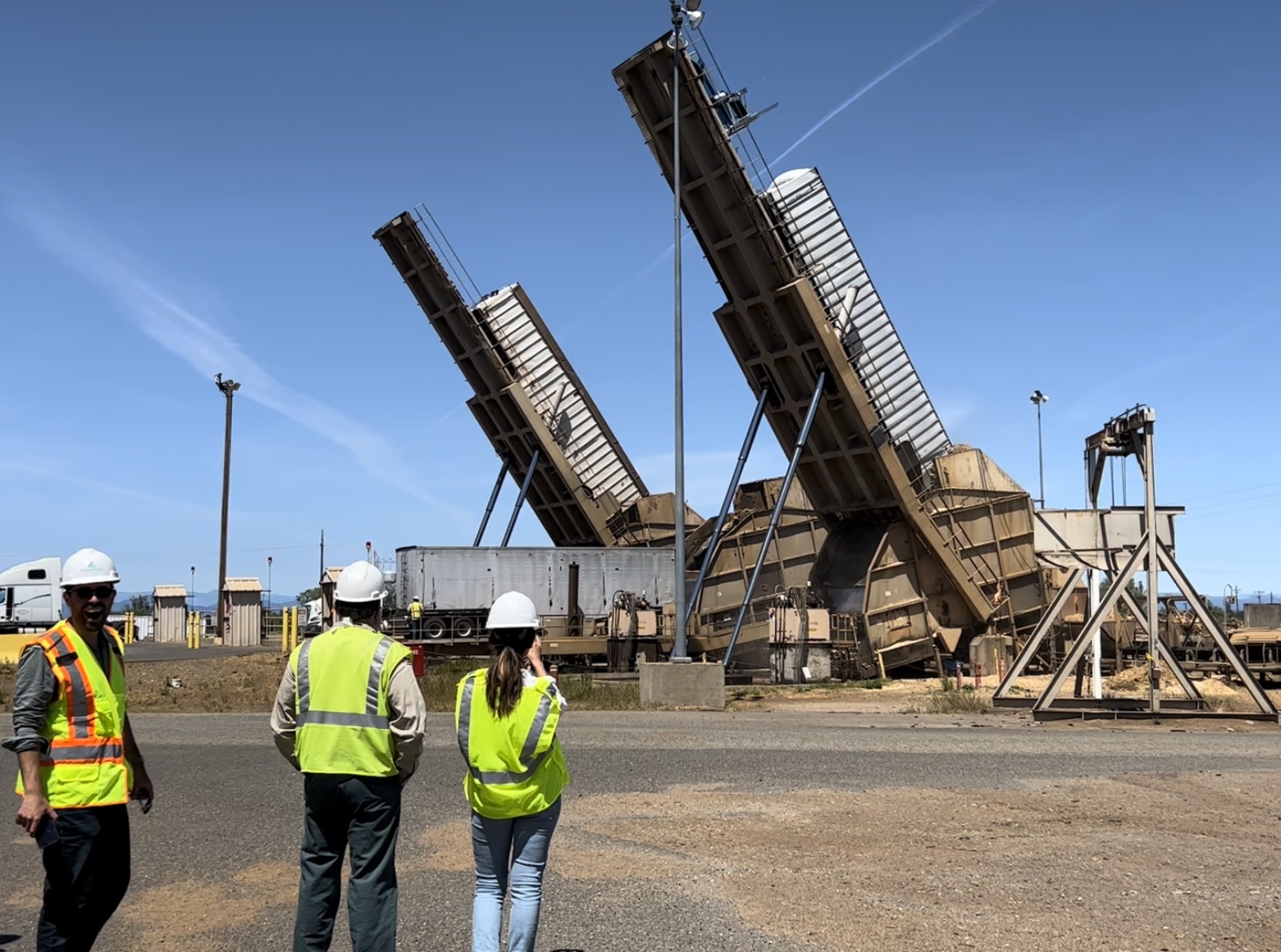 Biomass, and solid material handling in general, is a perennial problem that challenges the best engineering teams. There’s an incredible niche world of specialized hardware vendors and consultants to solve just subsets of these issues. When discussing material handling issues with other people in the industry, a common refrain is “what did Jenike say?” We don’t want to be the next startup consumed by material handling, so this was a really important problem to solve.

So, how do you convey a fluffy, fibrous mash of plant matter into a pyrolyzer… reliably?

The first step uses a tub grinder to turn a bale into a stream of biomass pieces under 6 inches long. These “6-inch-minus” pieces are then transported to a hammer mill that reduces the pieces to sub-inch particles, capable of being carried by an auger without wrapping around the shaft. 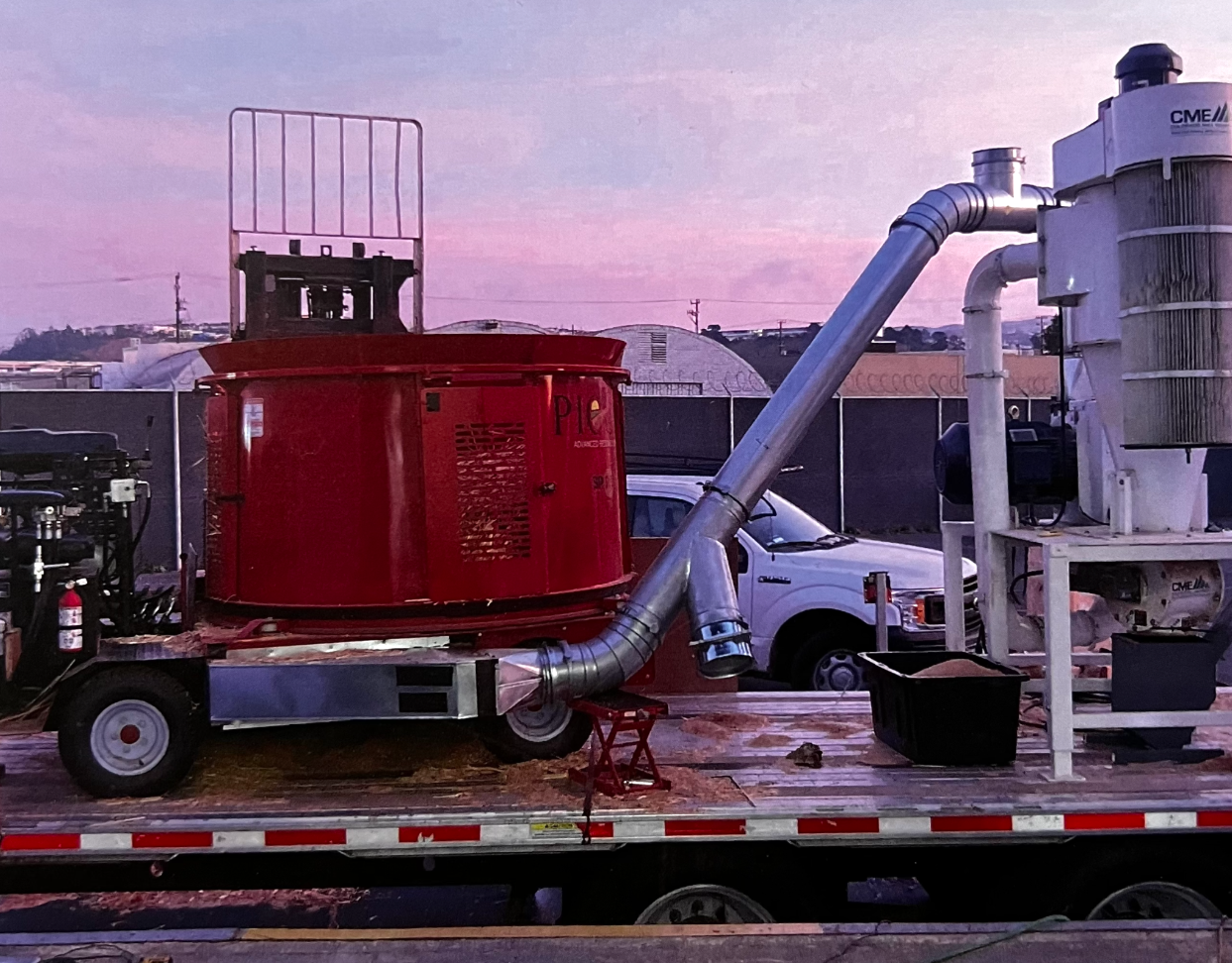 And that density was a problem. Even after being processed through the cutting head of the tub grinder, the fragments were too heavy to be reliably conveyed pneumatically. Where an occasional rock (or even handgun!) might gravity-separate and sit idle in an unencumbered biomass stream until the next maintenance window, the large volume of cobs caused blockages throughout the ducting. 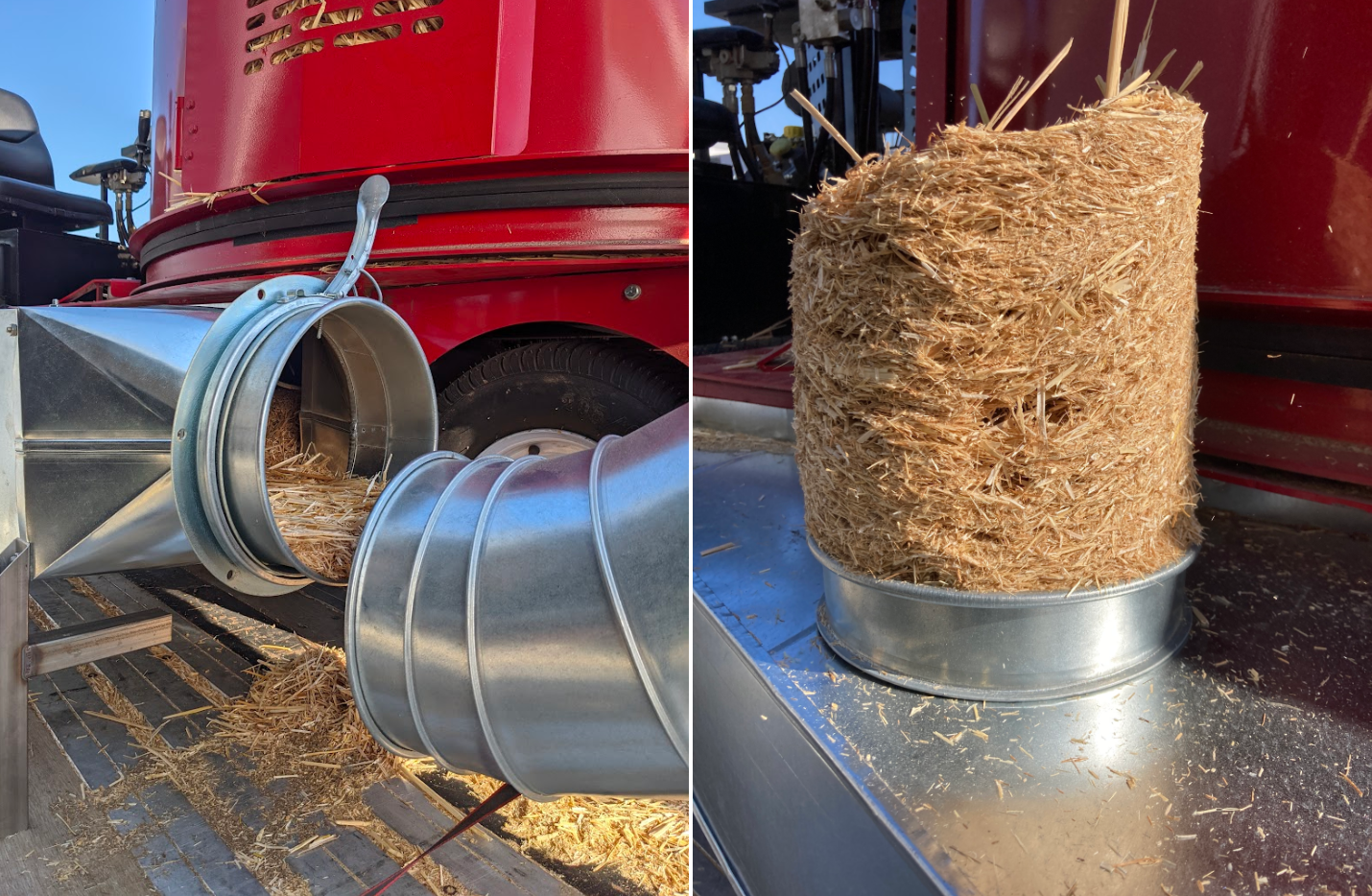 With the bottleneck clearly isolated, we decoupled the two systems: material handling and bio-oil production. To keep testing our 10tpd prototype while we solved the corn cob blockage, we added a new side-channel feeding mechanism for biomass pellets. This allowed us to continue pyrolyzing a variety of feedstocks (anything pre-pelletized) while we engineered a new biomass processing solution.

Our previous design used pneumatic conveyance, but the tub grinder’s cutting head, in tandem with the hammermill’s vacuum system, wasn’t generating enough air flow. Increasing the pressure differential across the problematic conveyance system would be difficult without major changes to the hammermill and downstream hardware. Reducing the piping diameter would have increased the flow velocity, but at the expense of increased risk of blockages and a reduction in maximum material flow. If we introduced yet another source of positive pressure, we’d have competing sources of air flow (and we’d likely have to redesign the tub grinder itself). There was no simple fix.

We do use screw augers throughout the system, but here it wasn’t the right fit here. Long biomass strands and hard chunks can easily strangle a shaft or jam a flight. To convey these cobs with you would need an incredibly large auger with a beefy motor to boot. The geometry in this particular spot was also tough. It’s challenging to convey biomass with augers, as we’ve written about before!

So... belts! A belt conveyor with cleats (better lifting) and ducting (dust reduction and loose material containment) solved for the geometry, solved for air flow, and is commonly used in similar applications. We had initially not found any easy commercial options for these belts, ranking them lower in the design trade. But with some deeper searching, we found a great, off-the-shelf belt that would arrive quickly. This was an easy choice for the next iteration. 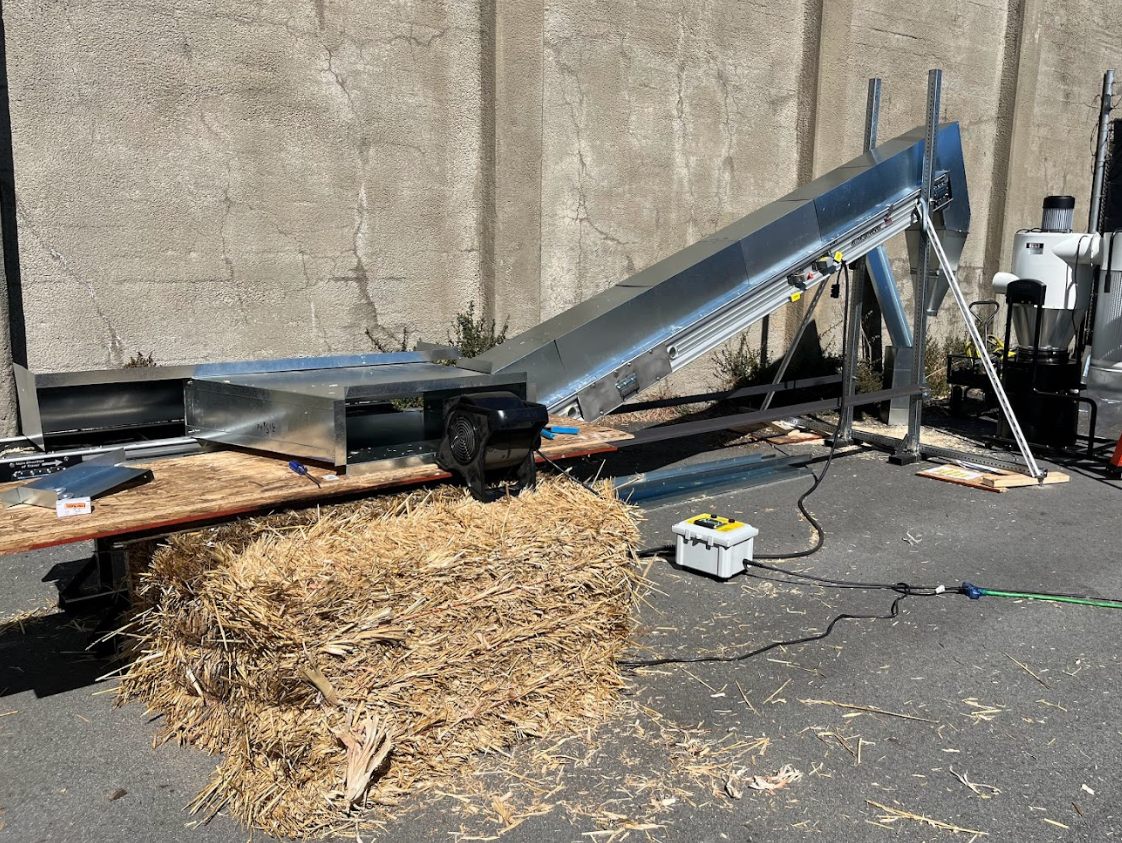 In the end it took our team 7 weeks to identify the underlying issue, implement an immediate patch, evaluate options for fixes, order components with supply chain delays, test the new system, ship it to Kansas, and install it in the field. 😅We don’t waste any time around here!

Thanks to the team’s hard work, the biomass processing system was up and running! There are certainly more iterations to come, but we finally reached a stable baseline and could breathe again. 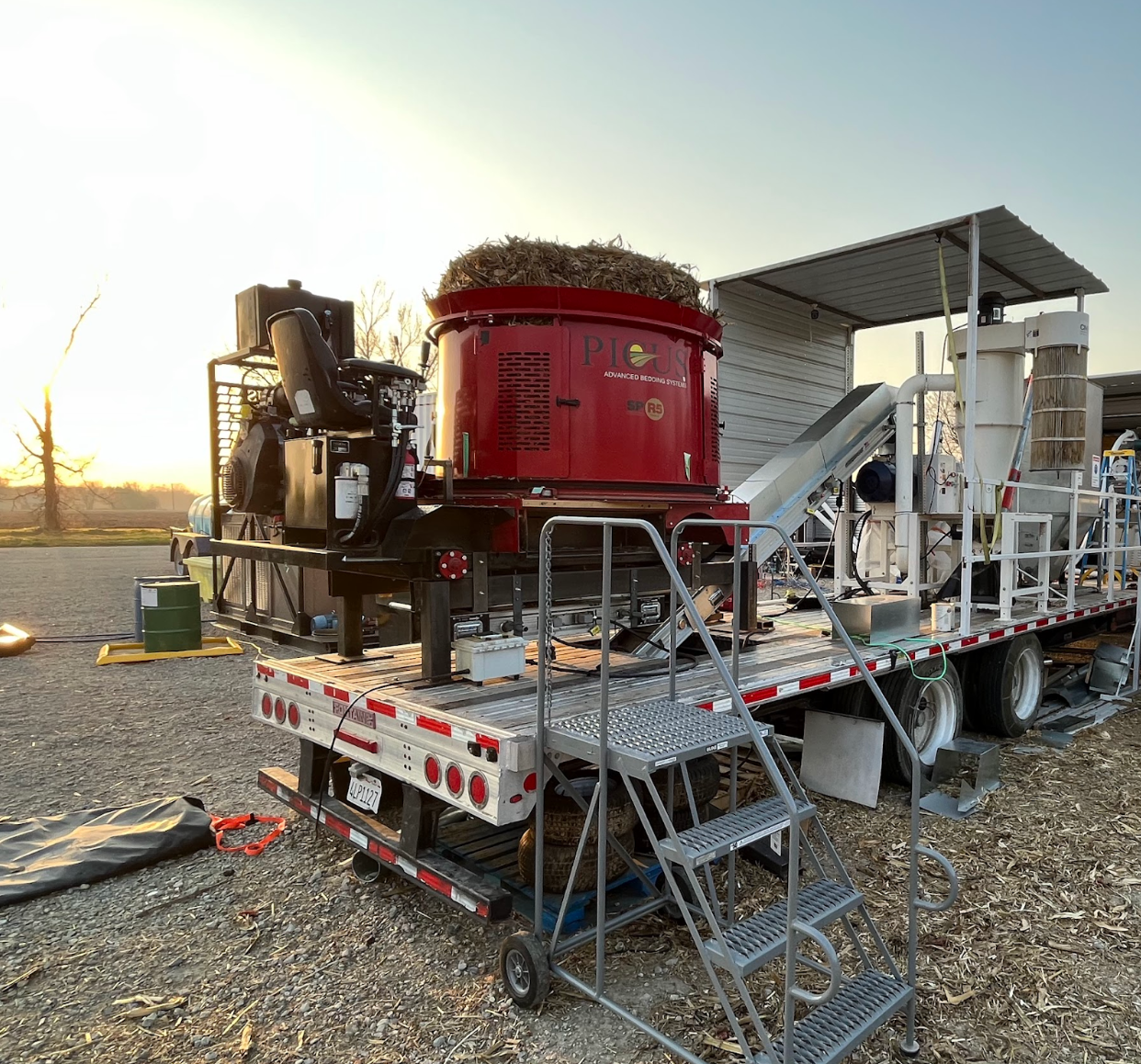 Of course, when you solve one bottleneck you find a new one somewhere else 😏Burners, char separation, and condenser heat removal capacity are new areas of focus for us as we continue pushing toward a mass-manufacturable, highly mobile, bio-oil production fleet.

Come help us put oil back underground! We’re hiring mechanical, chemical, and electrical engineers as well as many more roles. Everyone is new to climate tech (many of us come from aerospace!) so don't be shy, you too can help return the atmosphere to 280 ppm CO₂. 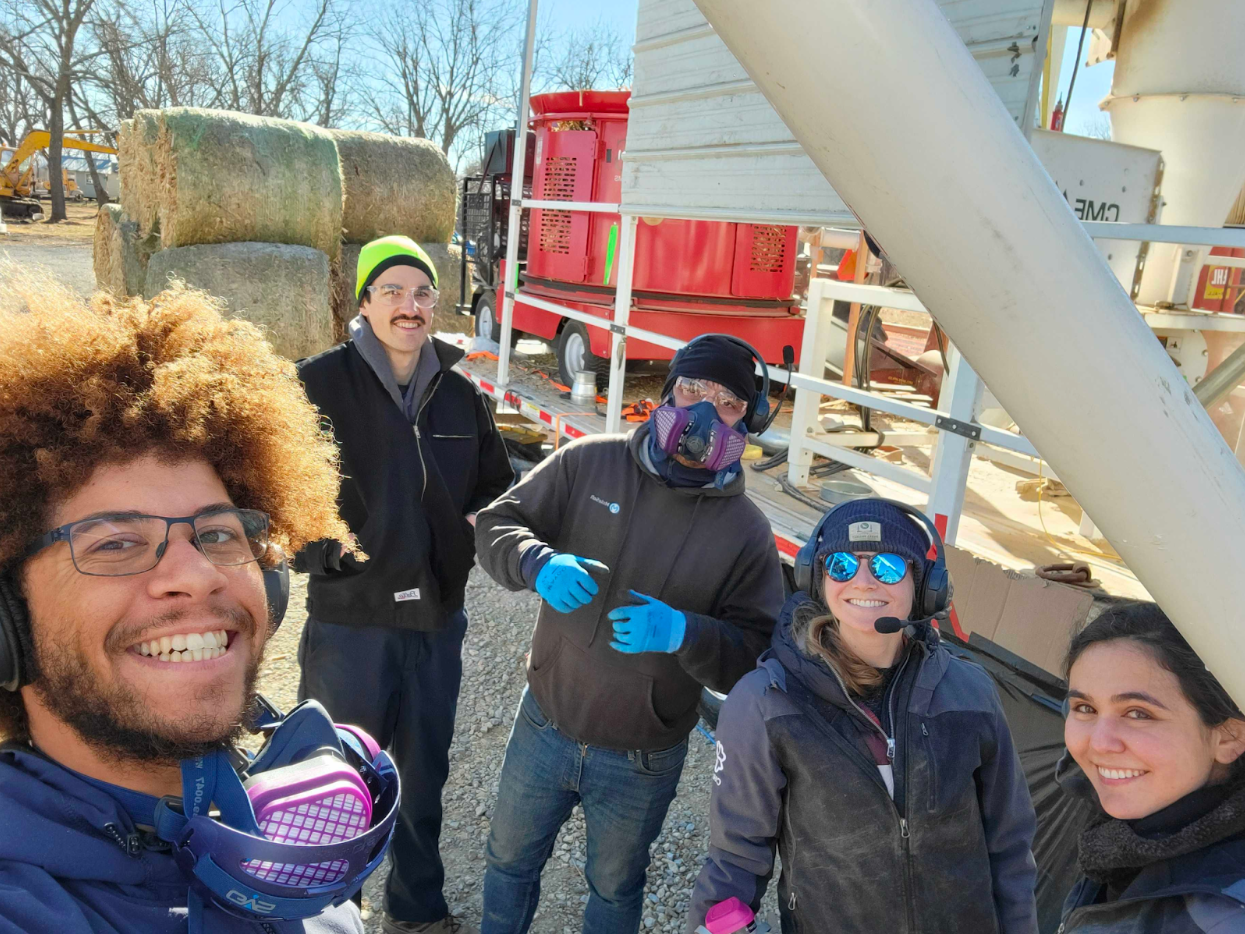