Stripe purchased 416 tons CO₂e in carbon removal from Charm in May 2020, as our very first customer. That carbon is now permanently sequestered in geological storage.

When Stripe made their purchase, our proposed carbon removal method was only a few weeks old and untested. In the 11 months since then we’ve built, tested, patented, and confirmed our methodology with deep scientific panels not only at Stripe but at Shopify, Microsoft, CarbonPlan, CarbonDirect and others. Even better, we delivered the first 150 tons CO₂e of carbon removal in January 2021, and are announcing that as of March 26, 2021 we’ve completed delivery of the entirety of Stripe’s carbon removal contract and delivered the final documentation of completion to Stripe. 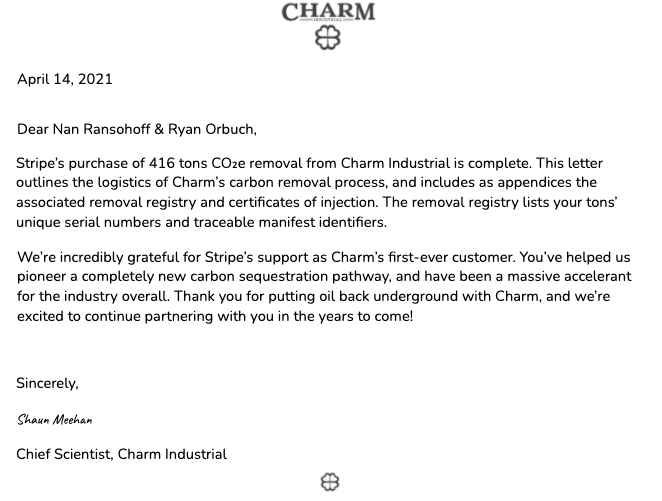 Ryan Orbuch of Stripe’s Climate team had this to say:

We’re on track to permanently sequester carbon for all contracts ahead of schedule, and are continuously scaling up our sales and sequestration volume.

Conscious consumers and companies are moving towards engineered carbon removals after carbon registries, verification bodies and trusted brands have sold fraudulent carbon offsets with abandon. Research from Oxford, Stanford and Berkeley has found that 85% of nature-based carbon offsets sold today are not “additional”, meaning nothing happens as a result of the carbon offset purchase. This has triggered a momentous shift towards permanent removals beginning in 2019 with Stripe’s landmark carbon removal RFP, followed by Shopify’s later in 2019 and then Microsoft’s in 2020.

For companies and individuals looking to have exceptionally catalytic impact on carbon removal and the climate as a whole, as Stripe has had, we’d love to share more about Charm’s carbon removal pathway. Learn more here and contact us at sales@charmindustrial.com.

We’re incredibly grateful for Stripe’s “first mover” purchase, and excited about our continued rapid scaleup and partnership with Stripe.